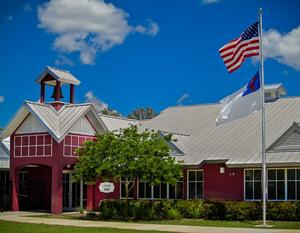 A BRIEF HISTORY OF THE VILLAGE SCHOOL

The Village School began as The Caring Place Preschool in 1985 as an outreach at North Naples United Methodist Church and remained that as a wonderful place for young children until 2000. That is the year the church relocated to the present campus and added The Village School. It began with K-2 and 37 students.

In 2006, the school was accredited by the Florida Council of Independent Schools and the Florida Kindergarten Council. The school continued to grow with a focus on Christ Skills, Gardner’s philosophy of multiple intelligences and teachers committed to the mission. After three years, parents asked for a middle school to be added and soon after added the middle school one grade a year to complete the eighth grade. During that period in its history, the school began to study STEAM education practices and in 2014 certified the entire staff in that philosophy of curriculum development.

The school has enjoyed a reputation as a STEAM school, being recognized internationally in that capacity with visitors coming to see how STEAM is taught at the school. Also, other programs developed including a strong performing arts department. Both of these aspects of the school are recognized in the community and indeed respected for leadership.

In 2013, the Board of Directors voted to add an upper school division in the fall of 2017. A capital campaign followed, and the new division opened in August, 2017 with 17 students. A new classroom building and gymnasium completed the campus building program. New sports fields were added to include areas necessary for an expanded athletic program.

In June 2020, the school celebrated its first ever graduating class of seniors with a class of twelve students. Since then, the total Upper School enrollment has grown exponentially, with the division serving over 100 students in grades 9-12.

In February 2021, the school announced a $3.2-million renovation and expansion of its academic, arts and athletic facilities to accommodate current and future growth. Included in the campus improvements were a near doubling of space in the current two-story Upper School Building along with the creation of the Lauren Tayon Drama Studio, a dedicated black box theater space in the first floor of the Upper School. The latter phase of construction will include the addition of an all-new Track and Field stadium along with other related athletic facilities.

The school has maintained the original mission and enjoys a unique position in the Naples community. There are students from many different faiths in the student population and all are welcomed and included. The teaching staff has remained strong and committed and the school looks forward to continued health and growth in the independent world in Naples.