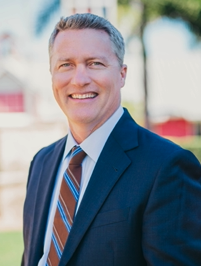 Dennis Chapman, Head of School at The Village School of Naples (TVS), has over 19       years of independent school leadership experience and over two decades of non-profit experience.

Since arriving at TVS in 2018, Mr. Chapman has led an increased enrollment of 53%,   tripled the size of the Upper School student body, and increased annual giving by 438%.   During his tenure, he raised $2.2MM to construct a Track and Field Complex and expand   the Upper School.

As Head of School at The New School in Fayetteville, Arkansas, from 2014 to 2018, Mr. Chapman raised $15.5 million to launch an upper school division, led over $30 million in construction projects, increased enrollment by over 31%, and increased annual giving by 276%.

Before becoming the Head of School at The New School, Mr. Chapman served as the Associate Head of Advancement at The Out-of-Door Academy (ODA) in Sarasota, FL from 2007-2014. There, he led a fundraising effort of over $30 million during his eight years at ODA.

Mr. Chapman began his independent school experience in the Development Department at The Benjamin School in North Palm Beach, FL, where he also coached Middle School basketball and baseball.

In addition to his school leadership roles, Mr. Chapman presents annually at independent school conferences and has received nearly a dozen industry awards for work in independent school marketing.  He has served on the Board of Directors for ANSAA (Arkansas Nonpublic School Accrediting Association), on the Reopening Schools Task Force for FCIS (Florida Council Independent Schools) and has served on and led school accreditation teams for FCIS, ISACS (Independent Schools of the Central States), and ANSAA. Mr. Chapman is also an active member of the Southern Headmasters Association.

Dennis and his wife Brooke have two children at The Village School, Carly, ‘27, and Cooper, ‘31.

Welcome to our website and thank you for your interest in The Village School. I would like to share with you, parent-to-parent, the experience of my first visit to our campus as a prospective parent of two students. When my wife and I learned of the potential opportunity to lead this fantastic school, our first step was to research The Village School online. What we found were heartfelt and passionate reviews on the school’s Facebook page. We knew these were organic and reflective of the school community that we were considering. We then combed through the school’s website and learned more about the mission of the school, which is “to provide an environment that empowers and inspires students to think and create solutions to challenges in an ever-changing world.” The forward-looking mission of The Village School aligns with my educational philosophy, which, in part, is to make real-world learning fun and personalized for each student while preparing students for careers that may not exist today by providing them an environment where they can feel safe to F.A.I.L. (First Attempt In Learning) forward.

Our journey continued during our first visit to campus. When we walked the halls on campus, we observed overwhelming evidence of what we had read. We saw authentic, real-world teaching and learning occurring in each classroom. It was clear that close personal relationships were happening between the faculty and students. There was a sense of joy and happiness on everyone’s face, which is hard to replicate. It was proof that this is a special place where the students experience the joy of learning.

After we submitted an application, our children shadowed for the day. After we left campus that day, I asked them to tell me about their experiences. My daughter commented that while she was apprehensive at first, she made “a best friend and many other friends.” She also “really loved science!“ My son reported, “It was FUN!” and gave it a thumbs up. The fact that neither of them wanted to leave at the end of that day was proof this is truly a magical place for children. Their feelings about TVS have only grown since that day in 2018 and we consider ourselves Knights For Life! As we learned through the admission process, The Village School is a community that is incredibly welcoming to new families, something that is important as a consideration when relocating to a new school.

Beyond learning in a safe and vibrant environment, the students exercise life skills, which will prepare them for college and beyond. A STEAM-based curriculum based on Whole Brain research and supported by Christ Skills gives the students a solid foundation and preparation for life.

On this website, you will learn what makes The Village School a fantastic environment for your child. The next step is for you to visit and see it for yourself. I encourage you to tour The Village School of Naples campus soon. I look forward to welcoming you to our beautiful campus.